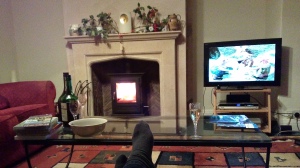 We’ve been living up here in the north for seven months now and are getting the feel of the place. The house has had new windows, new boiler, new bathroom, and the wonderful logburner illustrated above. I’ve got a full time job again which is busy but fun. I have to be careful that the poems don’t fizzle out due to lack of attention.

Last year I undertook the discipline of joining the marvellous Jo Bell‘s on line poetry community, Fifty Two. Write a poem a week, she exhorted us. Start now. Keep going. More than five hundred poets took up the challenge and joined in. I did it! – each week through 2014 I posted a poem on the related Facebook page and waited for comments. I watched dozens of other poets post their work and tried to leave helpful feedback. There were some amazing poems. There were some people who posted ten or more poems from each prompt. I generally managed one. When we started out, I was living on my own in Oxfordshire with no job, two cats, and a house to sell. By the time we finished I was living in Durham in a new house with my (old) husband and a full time job. Only the cats hadn’t changed.

Did I write anything good? Well, one early poem was published by the wonderful Nine Arches Press in their journal Under The Radar, which was most pleasing. Some of the others need a lot more work. So far this year I haven’t written any new poems, I’ve just submitted some of my 52 to possible new homes in the world.

Being part of 52 taught me that you don’t have to wait for some unreliable muse in order to write a poem that other people appreciate; that improbable subject matter such as songs, body parts and goats can provide something approximating inspiration; that the commonest good advice for a poet is “lose the last two lines”.

There was another benefit to taking part that the wise Ms Bell knew all along; we created a community. So when I started looking around my new abode for poets and poetry evenings, I had a ready made network of north-easterners to tap into. But more of them in a later post.