We’ve been in Teesdale for two years now. I’ve written quite a few poems about being uprooted from the place where I spent almost twenty years – poems about place, home and belonging. We’ve been working, decorating our house and dealing with a big garden; it feels like we haven’t had a lot of time to get to know our new surroundings.

Then a couple of weeks ago I found out that a really interesting symposium was going on, right in my new home town of Barnard Castle. Artists, Farmers and Philosophers was a discussion promoted by the wonderful Heart of Teesdale Landscape Partnership about landscape, how it is formed, recorded, enhanced and preserved by the people who use it and respond to it. I learned something about hill farming, land art, and aesthetics, which made me think about how, as an ‘offcomer’ I can get to know the landscape of my new home. (I’ve updated the photographs that form the header of this site with my photos of the local landscape, and I promise to add more.)

This made me think about Teesdale and the River Tees that shapes it. There’s a long tradition of writing about rivers, sometimes as an allegory of a human life or as the life of a civilisation, sometimes as an observational study. Alice Oswald’s 48-page poem ‘Dart’ played a huge part in my own interest in reading and writing poems. I love the way Oswald is equally lyrical about a milk-processing plant as she is on kayakers and wading birds. It also gives me some courage that Oswald was not a native of the area she captured in her poem. Then there’s this: 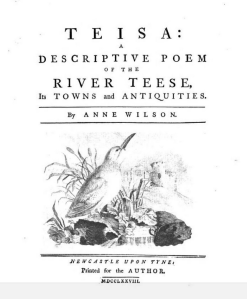 Nobody seems to know much about Anne Wilson, who, in 1798, self-published a 1600-line poem tracing the Tees from its source to its mouth. It was written, unsurprisingly, in heroic couplets; with many classical allusions, appeals to the muses, and a long, rambling Arthurian story that gets in the way somewhere just east of Barnard Castle. Since that time, a lot of water has passed under a lot of bridges. The Industrial Revolution has been and gone, Sir Walter Scott wrote ‘Rokeby Abbey’, John Cotman and J.W.M Turner sat on the banks of the Tees and painted. Lewis Carroll grew up on Croft-on-Tees. But many places that Wilson invoked are pretty much unchanged after 220 years.

I think I should have a go at writing an updated Tees journey. It will make sure I really get to know the place, to look at it and listen, and to walk as much as possible of the Teesdale Way, which goes all the way from the highest point on the Pennines to the South Gare breakwater in Redcar. I’ve already made a start.