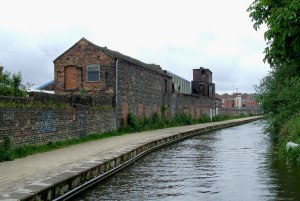 A few weeks ago I went to a poetry workshop in Avebury, led by Jo Bell and Martin Malone. After a bracing walk around the stones, which we used as a starting point for our imagination, we began to consider our own personal archaeologies. As I come from Stoke on Trent, I took the derelict “pot banks” and their surrounding landscape as a theme, plus a line from a poem by Adam Thorpe, and wrote this:

It’s artificial and there’s nothing at the core
Adam Thorpe; ‘Silbury Hill’

It’s artificial and there’s nothing at the core
but clay and pebbles; this ditch and bank
cut for a waterway, that, for a motorway.
This sheer cliff a windowed warehouse
where plates nest on spacers made of fireclay
and pots hunker down in saggared cists.
Here a toilet-bowl midden cast out by Doulton
there, winding gear, as pithead megaliths.
Rounded cairns barrow within the landscape,
squat, strangely bottle-shaped and hollow
as a hermit’s cell. They bear traces of old fires,
their use no longer understood, but probably
of ritual significance. Today, all we remember is;
they’re artificial and there’s nothing at the core.