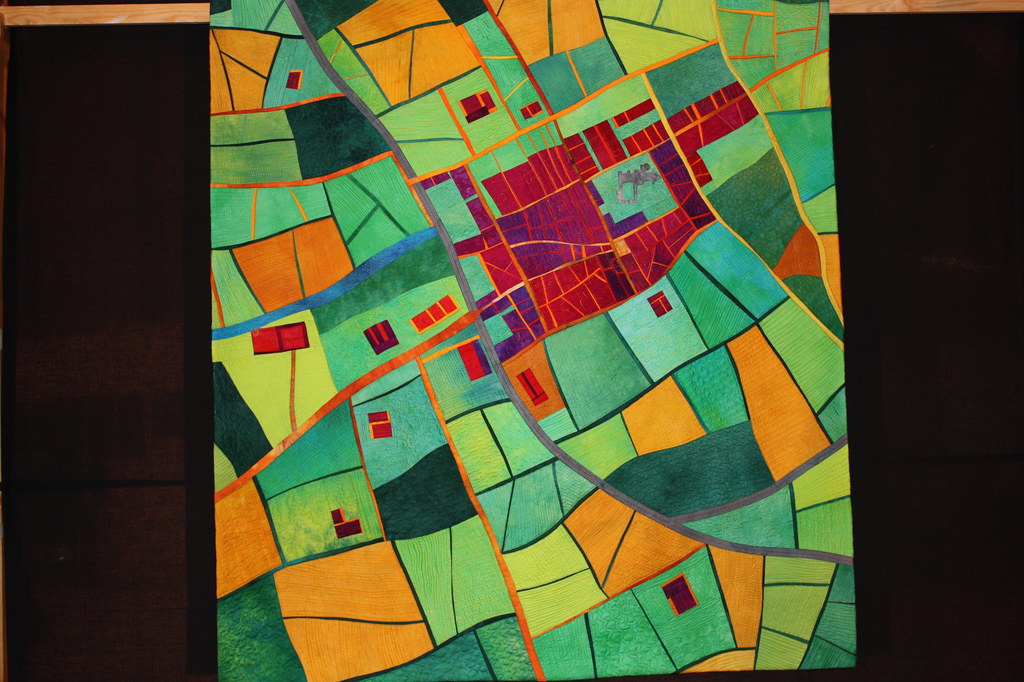 My poem “Back to the Six Bells” is based on two things: first of all, my second date with the man who is now my husband, in August 1990. (In case you wondered, our first date was the Brighton Beer festival, where he ate chips with mushy peas in the hope it would impress a northern lass.) We went walking in Sussex, and ended our walk at the Six Bells in Chiddingly, a quintessential English pub. It was a Bank Holiday weekend and as well as a fleet of bikers, there were Morris Dancers, warm beer, and a cricket pitch with a match in progress. The second thing was a dream I had in which England was presented as a quilt (I was glad to find there are artists that do make cartographic quilts, such as Alicia Merrett for example) and I pointed to that part of Sussex and said we should live there. To that extent it was a dream about going back to a beginning, maybe even a time before England went wrong, and that is reflected in the poem.

Back to the Six Bells

Sometimes I dream of England as a quilt
that I run my fingers over, feeling the hum
of motorways like the ribs of flat-felled seams,
the velour of fields, and sequinned towns
that catch beneath my fingernails. I feel
the textured border separating Sussex
and Kent, felted with hop bines and apple trees.
We’re going to live… here, I say, among pantiles
where the stately homes hold plant sales
and vintage cars thread meadowsweet lanes,
near the place where you and I first went walking.
You, in a cowfield in a red T shirt. You, at the pub
where cricketers and morris men wove
through a village soft with sunshine. When we still had
all of England spread out in front of us.

I workshopped this poem with my usual workshop group. A well-known poet, whom I really respect, told me that I couldn’t write about England in those terms any more, because the far-right now own that version of Englishness. When I was putting together my poems for The Ship-Owner’s House, I told this to my editor, the wonderful Jackie Litherland, who agreed with me that we cannot allow the far-right to define Englishness. We have to reclaim our culture in a number of ways, and poetry must be one of them. This thought is going to feature in my work for some time to come.